The unexpected and sudden deletion of tens of thousands of reports from the USDA website last week horrified and frightened animal advocates across the country, including me. I was so surprised and dumbfounded and angry that I started crying. Tears are a rare occurrence on my part and usually reserved for deaths and TV shows where the romantic leads don’t end up together. But I was that upset, more upset than when Dawson and Joey didn’t end up together in the 2003 finale of Dawson’s Creek.

Jokes aside, if you care about animals, even a little, you should be scared and really, really, upset. Compounding my upset is the number of animal lovers who are refusing to believe this is true and claiming “fake news.” This is a rare situation where the story is coming from the government itself. I can’t imagine the number of people who would be claiming it was false if it were just reported on by traditional media outlets.
So. I hope in the following summary, I am stating facts about this only from the USDA itself.

I will say that some animal advocacy groups have to step up their game and need to be careful and deliberate in their phrasing. Immediately after the announcement, some Facebook posts and stories were misleading. I saw multiple stories something along the lines of “USDA scrubs website of references animal welfare.” This prompted many people to flip out across social media because references to “animal welfare” still exist on the website.

Of course they do. References to “animal welfare” also appear on the websites of all major factory farms producers and groups that lobby on behalf of puppy mills. For example, Smithfield (a giant factory farm that processes and slaughters pigs) has a page on their website about “welfare” complete with friendly graphics.  I think what we can learn from that is that animal advocates need to be very careful and deliberate in their phrasing.

So no, all references to animal welfare was not removed from the website, just the important stuff! These reports provided a bit of transparency about whether businesses (like puppy breeders, companies that test on animals) and research laboratories and zoos are following the federal Animal Welfare Act (AWA).

It’s important to note that these reports just scraped the surface on what’s really happening to animals behind closed doors in the United States. The AWA doesn’t provide very strong protections for animals in the first place, so lots of places might be technically following the law but their practices would horrify most animal lovers. There aren’t enough investigators to adequately document and report violations. And violators often go unpunished.

It was a deeply flawed and inadequate system in the first place. But now it’s gone. It’s kind of like complaining you hate the Brussel sprouts you’re forced to eat for dinner every night but then one day, wake up, and find out you’re only being served mud from now on.

I want those sprouts back, badly. National groups across the country are gearing up to fight and investigating legal options. For All Animals intends to circulate action alerts so people can contact their legislators and ask them to prioritize transparency in the USDA.

Join us. We have our work cut out for us. 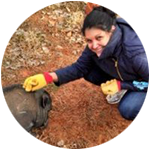